Liz Solo and the Ocarina of Time is a durational Installation/Performance Piece involving the popular Nintendo game The Legend of Zelda – Ocarina of Time. The game is projected large (8.5 X 12 feet) in the presentation space. The Artist plays the complex problem-solving game without stopping until she has destroyed Ganon, the final dungeon master.

Audiences are invited to bring items to help sustain the Artist through the gruelling performance – food, beverages, smokes, money. Many offering were made during the last performance, one evening visitor returning the next morning to bring the Artist breakfast. Other artists were invited to come and play music, dance, DJ or hang out and play the other video games set up in the space. The playing of the game becomes a social event, the large scale projection gives both the audience and the Artist a sense of immersion in the experience.

The Artist has officially beaten Legend of Zelda – Ocarina of Time in 23 hours and 57 minutes, meeting her challenge to conquer the game in less than 24 hours (special thanks to consultants Sam Hall and Eli Whalen). The Artist claims that she would have beaten the game in less time had she:

1) remembered to look up for the hookshot targets in the Cavern of Vortices in the Water Temple and
2) remembered that you ALWAYs go to the trouble of getting the Biggoron Sword, otherwise you will be stuck with defeating Ganon with the Megaton Hammer. 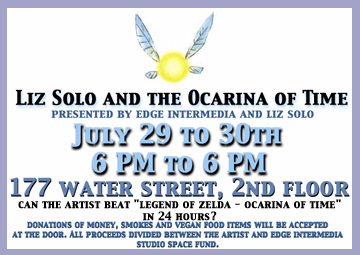