Liz Solo’s career in music as vocalist, guitarist, drummer and composer/songwriter for theatre, film and the stage spans three decades. Liz continues to write, record and perform with many different collaborators.

Liz’s most recent releases are from The Sauce (with Colleen Power and Mike Kean).

The Black Bag Media Collective has begun to release recordings from their archives and an old concert by Liz Solo and Ron Hynes has just been released, more from that series to come soon.

All of Liz Solo’s official releases are available for streaming and download on Bandcamp – click the album covers or links below to go directly to each album’s page.

Read down through the page for official Discography, Press Quotes and a selection of photos.
photo above by Paul Lewendon.

“The Lizband have been at the forefront of the St. John’s scene since day one” – Granite Magazine

“Liz lets her full vocal range come into play, from soft floating melodies down to the gutter with hard edges and spikes” – The Telegram

“Liz Solo’s voice is equal parts bitch-goddess rage and girlish fragility, and her songs are of loss, forgiveness, frustration, scars, bruises, love, and the universe. Instrumentation on alien ranges from sweet, delicate layering to thick electric rawk. The depths of downtown St. John’s and the heights of outer space meet here.” – Andreae Prozesky, The Scope

“..the Lizband has grown to become a pillar of east coast independence and one of the longest lasting ‘non-traditional’ bands from St. John’s” – Reverb Magazine

“This is an honest and understated rock album which doesn’t betray any of the grit of the band’s live performance… definitely worth the cover charge.” – What’s Goin’ On

“…Their much anticipated, self-titled debut was recorded this year by Jody Richardson and Grant King of Pathological Lovers, and it sounds absolutely stunning. Beautifully produced and mixed, the record fuses the grungy sound of the early to mid-nineties St. John’s scene with more modern pop-punk sensibilities, a combination I absolutely love….. 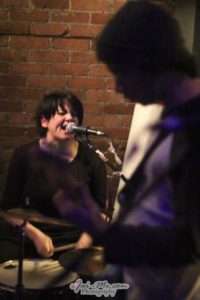 “From the crisp drums and stuttering bass line of opener “Kelowna Rocks”, The Black Bags come out swinging and plow through track after track of pure rock goodness.” Damien Lethbridge

“Upon listening to the Black Bags self-titled CD, one is struck by a couple of key features. Firstly, Liz Solo is still at the top of her game and continues to be the premier female rock vocalist in NL. 20 plus years and going strong. Secondly, Retro-Rules, the early/mid 1990′s in this case, and thirdly, Marcel Levandier’s development as the yin to Liz’s Yang as a lead vocalist.

The disc opens strong. “Kelowna Rocks” dives at you like a spirited invitation with Liz displaying Chrissie Hynde, Johnette Napolitano verve on lead vocal, followed by an invigorating lead from Marcel on “Worth Living” buffed by tasty back-up vocals.

“Raining Hammers” is an album highlight and shows off the band’s punk roots with a clink of the glass to early influence, Mike Wade. Tracks 4-7 favorably harken back to classic Concrete Blonde, Buffalo Tom, and Lou Reed. “Held Down” with biting rhythm and lyrics, reeking of frustration and stress, “Secret” is beautiful and timeless in quality and “Horizon” rivals Tragically Hip for intensity while exhibiting more punk roots. “Everything is Leaking” has a R.E.M. vibe, and “Lost and Learning”, the album’s closer, is a gorgeous, reflective dirge. Recorded and mixed expertly by Jody Richardson and Grant King- one of 2013′s best NL releases.” Fred’s Records

“The Sauce is the shit!” Bob Wiseman, Musician, Canadian Independent Artist and Producer

“Colleen and Liz exorcise a few demons with some Newfoundland Punkabilly. This is a slap down, verbally and musically. Cathartic and exhilarating” – Bob Mersereau, Music Journalist and author of The Top 100 Canadian Albums.

“The Sauce combine catchy tunes with witty, biting lyrics that make you feel just a little bit guilty for something you’re not quite sure of.” Bob Earle, CHMR FM Program Director